Who is Don Pollo?

Don Pollo has gone through a lot of changes over the years, but the commitment to providing delicious, authentic Peruvian inspired food is eternal.

Though Carlos and Danny Started their foray into the restaurant business together, they quickly realized they could start a business of their own. Peruvian style chicken was gaining wide recognition and praise in the region and they were eager to introduce a new authentic taste to the diverse Maryland and DC areas.

In 2003, the pair opened their first restaurant in Twinbrook, Maryland. They turned a simple deli into Don Pollo, working tirelessly until their restaurant met their high standards. In the early days of Don Pollo, they spent hours upon hours researching the recipes and taste-testing their various concoctions until finally, they perfected the tastes they were looking for.

From the tiling and groundwork to the actual cooking, Don Pollo was a joint effort between two men, built from the ground up. Everything from dishwashing to manning the cash register was work split between the two. No matter how small their restaurant was, customer service was always a priority, providing optimal service worthy of the Don Pollo name.

Carlos and Danny’s hard work has paid off and today, Don Pollo has gone from being one restaurant to a brand, spanning seven locations in total. The two also introduced a smaller restaurant to the area, called Chicken on the Run, which has since become staple of the Maryland area. Don Pollo hopes to continue its growth eager to introduce its signature Peruvian inspired chicken to more counties.

Get to one of our restaurants today and experience why chicken has never tested better.

Don Pollo is excited to share with you that we are in the midst of a brand transformation. We are so glad to have you along for this important step in our company’s journey. Below, you can see a sneak peek of our new brand. This branding transformation will slowly be finding its way to your local restaurant.

You can follow our brand transformation in real-time on our social platforms:

When it comes to providing truly authentic Peruvian cuisine, Don Pollo has the market covered. Our chef, Nelida Rosales was born and raised in Peru, where she eventually opened her own restaurant. When she came to America, it became clear that her talent couldn’t go unrecognized. She joined the Don Pollo family in 2016, working with Carlos and Danny to expand their menu and create new traditional Peruvian dishes.

Her work has since become synonymous with the Don Pollo name. Although she no longer lives in Peru, she managed to bring a little bit of her home country with her, using her extensive expertise in Peruvian cooking to introduce new cuisine to the Maryland and DC areas.

Stop by at one of our restaurants today and get a taste of Peru firsthand. 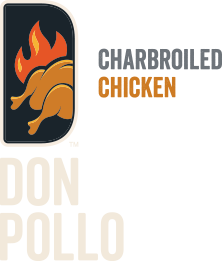